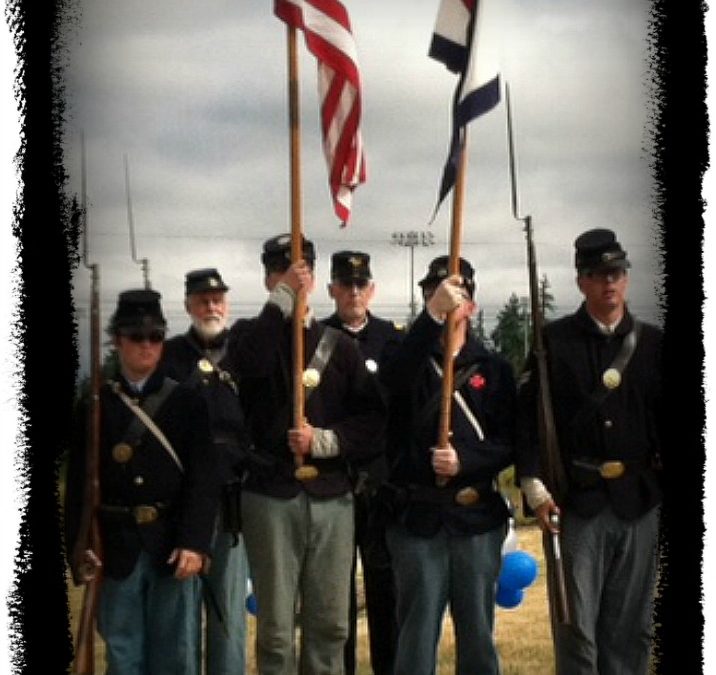 We attended a 4th of July breakfast with our church group this morning.
Some participants did an early morning run, followed by a scrumptious breakfast and
then a presentation of the colors by a civil war reenactment group.

As they marched the gravel road up the hill toward us to post the colors,
I saw that these four young men and two seasoned soldiers
were not dressed sharply in freshly pressed uniforms –
they wore historic dress….

Suddenly it felt as if they were really soldier boys right out of history past.
In Quantum view, time stood still.

They had given their goodbyes and heading off to war,
knowing they most likely wouldn’t be coming back home,
or if by God’s grace they did make it through,
everything would be changed for them
and for their families
and their country
and their way of life
by this thing called war.
Dusty and rumpled, these soldiers of yesteryear seemed very, very real.

Colors posted, the trumpet blared out the Star Spangled Banner,
and the boys in their uniforms stood a little taller,
made stronger by the meaning of the music.
Hands on our hearts, we sang along…

“Oh say, can you see, by the dawn’s early light”…
Dressed in sport clothes, shorts, jeans and tees….
We sang along,
standing by picnic tables decorated in red, white and blue,
with burlap table cloths, flag center pieces and bright shiny stars…

We stood up and sang along,
Bellies full of hash browns, eggs, sausage, cinnamon rolls, and fresh fruit…
Babies in arms and strollers,
Little ones playing at our feet,
Teens attention momentarily focused on the civil war living history soldiers…
We all sang…

“Whose broad stripes and bright stars,
Were so gallantly streaming.
And the rockets red glare,
The bombs bursting in air,
Gave proof through the night
That our flag was still there…
Oh say does that star spangled banner yet wave”…

And the very air between us and the soldiers seemed to wave…
As though there were a time warp between today and the past…
And I became very, very grateful for their commitment and their courage,
For America’s freedom and unity…

“O’er the land of the free, and the home of the brave”.

We remember.
And we are grateful.
For the brave,
Who made freedom possible.